Feels like forever since I’ve posted, it’s been a busy few weeks! Since finishing makeup classes I’ve continued to do practice on friends. Last week? Totally dedicated to whipping our house into shape. Now we’re a week post-housewarming and getting back to normal!

We bought our house in December (Merry Christmas to us!), renovated the kitchen and living space in January/February before moving in the first weekend in March. Here we are, almost six months later, and just getting around to a housewarming! To be fair… I could have used a few years to get the house to a presentable point BUT… we bought this house to entertain, and damnit – entertain we will!

When we bought our 1950’s era house, it had some ‘upgrades’ (using that term loosely!!) including laminate floors, new(ish) appliances and new countertops and flooring in the bathrooms. We decided the most important area to focus on would be the kitchen/living space and removing the load-bearing wall that separated those rooms.

In the photo with the fireplace, you’ll notice a weird round vent which was part of the swamp cooler (yes, it’s really called that) system. We removed all of the vents and patched those as well – including in the bedrooms. Not shown: moving our hot water heater to tankless and gaining a hall closet.

In the bottom photos – the panoramas – you can see where we patched over a window and door in the kitchen to give more room for cabinets & counters. We relocated the door to the now-laundry room into the entry way.

And where we are now…

I would have loved to have been able to share better photos of the house, but after 6 months I think these will have to do! 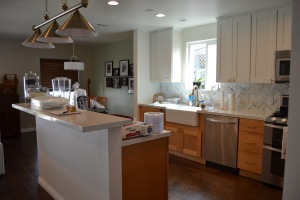 Still a work in progress, but we’re getting a little further each day. In the bottom photos, you can see the black & white gallery wall Kyle so lovingly hung for us before the party! And kitty-Margot even makes an appearance!

And of course we can’t forget the best before & after progression we have: the Benham entertainment unit. Our pops, Brian, flew out to LA to help us build this baby (with some inspiration and tips from Addicted 2 Decorating!) and it’s one of my favorite things in the whole house! 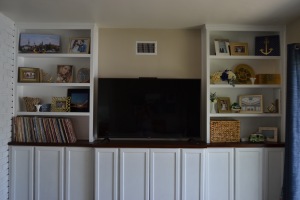 We’ve come a long way and have a ways to go, but we are loving every minute of living here! (Right now, Kyle & I are both “working from home” so thank goodness for the extra space!)

Oh, and the only photo I took from said housewarming was of the food. Next time I’m appointing someone as the photographer 😦

Painter’s tape to label everything – worked like a charm!

Hope you enjoy these photos of our home and look forward to sharing updates along the way! 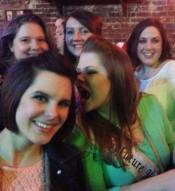 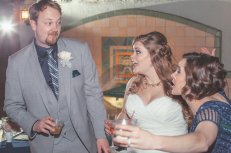 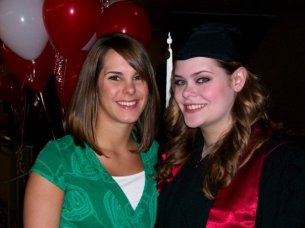